Keep up-to-date with the latest myopia-focused news and resources. Subscribe today for your MyMyopia® newsletter.

Can too much screen time hurt my child’s vision?

Myopia, also known as nearsightedness, is a growing threat to the ocular health of many children around the world. While there are hereditary factors that contribute to myopia and its progression in children, environmental factors play a role. A common theme running through the research around these factors is that the increased time spent looking at screens by children, combined with the reduced time spent playing outdoors, can cause permanent damage to children’s vision.1

In the U.S. alone, there are 14 million children with nearsightedness and that number continues to grow. The National Eye Institute warns that by 2030, 39 million Americans will be nearsighted.2 As children spend more time watching screens at home and are required to use more tablets and laptops at school, there is a growing concern about the potential long-term harm being done to their visual development.

Cheri Kiesecker, a Colorado parent and active advocate for children’s privacy, stated in the Missouri Education Watchdog, “There is mounting evidence that exposure to screens and wireless digital devices have very concerning health risks. There are many well-documented studies showing extended screen time leads to ‘rapid proliferation [explosion] of myopia’.”

Ophthalmologists, physicians who specialize in medical and surgical eye care, are seeing a marked increase in children with dry eye and eye strain from too much screen time.3 The American Academy of Ophthalmology offers further evidence that at least part of the worldwide increase in myopia has to do with near work activities such as looking at screens and books.4

Whether on a phone, tablet, computer or television, chances are your child has played video games like Fortnite or Minecraft which encourage continued and ongoing playing for long periods of time. Even the amount of time that your child has been binge-watching Netflix can play a role in their ocular health. Digital eye strain is caused by a number of factors such as glare and low screen contrast which forces the eyes to work harder than usual, and less blinking which happens while using digital devices.5 The most common symptoms associated with digital eye strain are headaches, blurred vision, dry eyes and neck and shoulder pain.6

While we can’t eliminate screens entirely, we can teach children better habits. To help alleviate digital eye strain, teach children to follow the 20-20-20 rule; take a 20-second break to view something 20 feet away every 20 minutes.7 Dr. Ayesha Malik, OD, a pediatric optometrist at Children’s Hospital of Philadelphia encourages parents to teach the 20-20-20 rule stating that “our eyes need breaks from close-up focus, and children can lose track of time when they become absorbed.”

The American Academy of Pediatrics also recommends avoiding digital media for toddlers younger than 18 to 24 months other than video chatting. For children 18 to 24 months, they recommend watching digital media with your children because they learn from watching and talking with you. For preschool children, ages 2 to 5, limit screen time to just 1 hour a day of high-quality programming, always co-engaging when possible. Other recommendations include creating tech-free zones and setting limits to encourage playtime.

Spending time outdoors—especially in early childhood—can also slow the progression of nearsightedness. In fact, increased time outdoors in children decreases the risk of new myopia onset by 50% and can slow myopia progression.8 9 Research suggests that sunlight and UV rays help promote healthy eye growth and therefore lower the chances of nearsightedness in children.10

In an interview with CBS News, Dr. Christopher Starr, an ophthalmologist at Weill Cornell Medical Center explains, “There’s a neurotransmitter called dopamine, which is stimulated by the sun, and dopamine controls the elongation of the eyes. So, if you have dopamine, the eye doesn’t grow as much. And if you don’t have enough dopamine by sitting inside, the eye can get longer and longer, and the longer the eye, the more nearsighted it is.”

Digital device and screen time use are a fundamental part of our world today. As myopia rates continue to rise, it’s important to protect our children’s vision and work to slow myopia progression by examining their relationship with electronic devices and teaching better vision habits.

Click here to learn about creative ways to get your child to spend more time outside!

From Our Resource Center 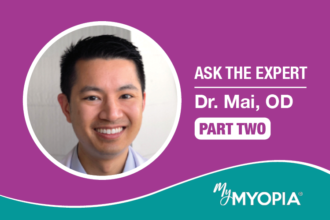 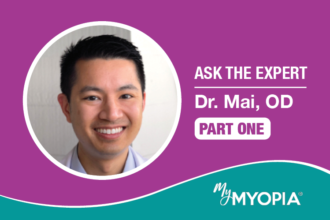 Visit us on Social